We are pleased to share a guest blog post written by Aidan Flanagan, who worked as a consultant to the Department of Forest Inspection (DOFI) in Lao People’s Democratic Republic (Laos). In this post, he describes his experience creating an app with Ona to reduce illegal logging and poaching. Aidan believes it can serve as a case study for countries facing similar challenges within and beyond law enforcement. 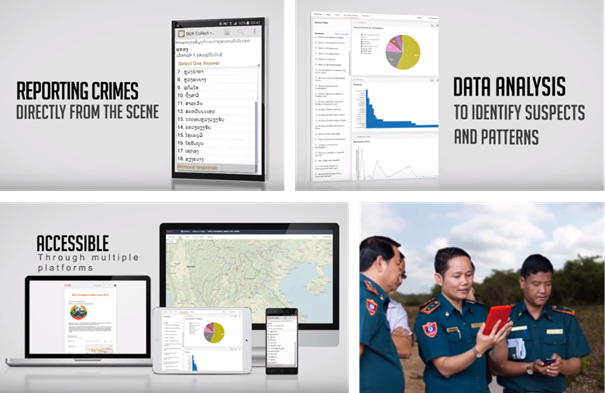 Laos is a landlocked, but land-linked, country which is the poorest and least developed in its region. It is surrounded by large neighbours with voracious appetites for lumber and forest wildlife (China, Thailand and Vietnam), and its porous boundaries make monitoring trade difficult, especially in illegal goods. My work at the DOFI involved exploring technological ways to enforce laws against illegal logging and poaching.

Despite the challenges, the adoption of new technologies and approaches has strengthened the enforcement of forest and wildlife laws. This brief note shows how Ona and the existing smart phone infrastructure were used to develop and deliver a low cost, yet sophisticated, solution to support law enforcement.

In 2015, I found myself in Laos, embedded in the DOFI, with support from the World Bank and Finnish Government to strengthen forest law enforcement at a central and national level. As a forester who had experience working in Southeast Asia, I knew that to be successful, new systems and approaches needed to avoid the common mistake of having project success rely on high maintenance systems developed by third parties and imposed on local agencies with little capacity to maintain such systems when funding ceases.

The challenges in Laos are common to other developing countries: limited finances, underdeveloped infrastructure, and resource poor. The country also has active wildlife and forest crime, porous borders, voracious neighbours, and a system that is predominantly paper based. On the positive side, the country had good national internet coverage and high rates of smartphone ownership.

My team’s challenge was to create a system that was appropriate for the country, practical in supporting their adoption, and cost effective to ensure sustainability beyond the project. We decided that to develop a national intelligence capacity, we needed a system that captures and centralises information, but uses a low cost, widely available platform i.e. the smart phone.

The solution we created is called Smart Phone Information Reporting and Intelligence Tracking (SPIRIT). It is a national platform for the reporting and analysis of forest and wildlife crime for members of law enforcement. Personnel at the field level are able to send reports about illegal activities to Ona’s dashboard where the response team can plan real-time responses. The SPIRIT platform uses Ona to collect, host and share data, which provides several advantages that increases chances for success:

We’re excited about the potential of the SPIRIT System. You can view an example of a reporting form at https://enketo.ona.io/x/#Y9nW. We have also used this platform to develop a ‘Criminal Dossier Database’, which is used to store information on businesses and individuals engaged in criminal activity. This form can be seen at https://enketo.ona.io/x/#YfFf. If successful, this methodology has the potential to transform law enforcement responses in Laos.