Who are the Experts?

This article was authored by Nshemerirwe Fiona of ACTogether Uganda and originally published on the ACTogether blog.

Often, it is assumed that experts are those who have taken time in school and learned from theories and renowned authors. As much as this might be true, it is not always the case as the two-day Ona training revealed about federation data managers. On the 12th of February 2016, Anni Beukes, Data Manager at Slum Dwellers International (SDI), came to Uganda to train federation data managers in cleaning and updating their data, which was stored in Ona. 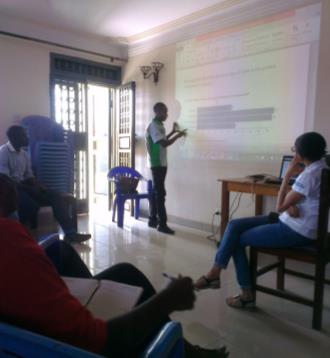 The first day gave an overview of the Ona platform, how and why it was created to facilitate data collection, visualization and sharing. The following two days involved data cleaning and the generation of reports from Ona. Within Ona, you can create multiple projects and grant access to different users who can access the data from wherever they are. The SDI-Ona project had been designed to enable federations across all 33 countries, in which SDI operate in, to share their data collected through profiling and mapping with the rest of the world. As such, the platform has simple design elements that are a replica of the federations old system of data entry.

At the end of the training, federation members were able to produce reports on sanitation, water and garbage using the Uganda data online database. So the question is who are the experts? It is safe to say the federation data managers are becoming experts not only in data collection but in management as well.